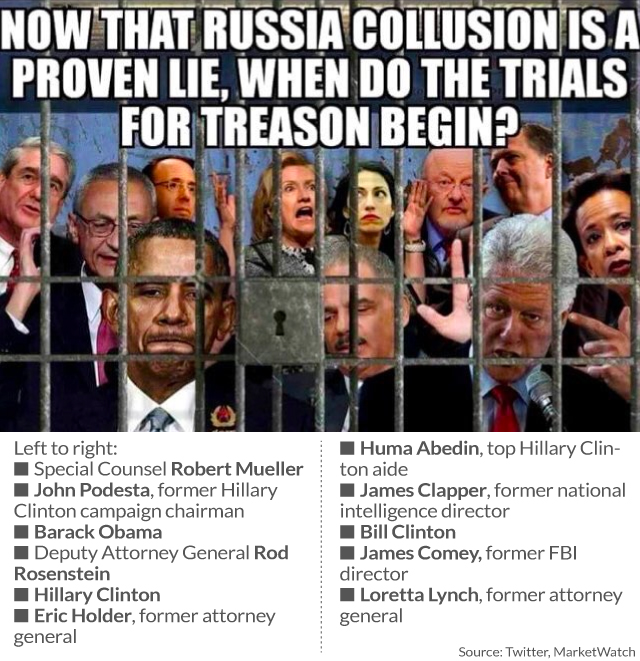 Perhaps the most troubling - and dangerous - aspect of the current political conversation is the unwillingness of virtually every elected official and every media pundit to confront what “Obamagate” is obviously about, which is treason. Specifically, treason committed by the Obama White House in attempting to block and then overthrow the Trump presidency. Obamagate is about the failed attempt by President Obama and his appointees to use government intelligence agencies to spy on the Trump campaign and White House, to concoct a phony accusation of collusion with Russia against the president and then to obstruct his administration and overthrow him.

Semantic deceptions are the currency of political conflicts designed to take the public’s eye off the ball. So it’s no mystery as that Republicans, whom Democrats regularly slander as racists, xenophobes, Islamophobes and deplorables should be cautious around a word as volatile and subject to misrepresentation as “treason.” It doesn’t help that the last individual charged with treason was Tokyo Rose, a Japanese propagandist during World War II. In the intervening years, the ties of national loyalty have been so eroded, the idea of patriotism so demeaned by the political left, that the charge of treason was not filed against the Rosenbergs, Aldrich Ames, Edward Snowden, Bradley Manning, or many deserving others.

If all parties remain reluctant to name the threat embodied in Obamagate, it’s not only unlikely but also unreasonable to expect justice to be the outcome. Fortunately, at least one political figure is ready to do this. One can assume it was President Trump who provided Rudy Giuliani, with the license to speak frankly. “They wanted to take out the lawfully elected President of the United States,” Giuliani told talk show host John Catsamatidas, “and they wanted to do it by lying, submitting false affidavits, using phony witnesses — in other words, they wanted to do it by illegal means . . . What is overthrowing government by illegal means? It’s a coup; treason."

This aggressive statement by the president’s lawyer is a sure guarantee that a reckoning is coming in the days ahead. But first there are the semantics. Responding to Giuliani’s accusation, law professor Jonathan Turley wrote: “No, James Comey Did Not Commit Treason.”  According to Turley: “Giuliani is engaging in the same blood sport of using the criminal code to paint critics as not just criminals, but traitors. Where one can dismiss some of these charges as political hyperbole, Giuliani was sure to preface his remarks as coming from ‘an experienced prosecutor.’”

Technically, but in a very limited way, Turley is right. Treason is defined in Article III, Section 3 of the Constitution in these words: “Treason against the United States, shall consist only in levying war against them, or in adhering to their enemies, giving them aid and comfort. No person shall be convicted of treason unless on the testimony of two witnesses to the same overt act, or on confession in open court.”