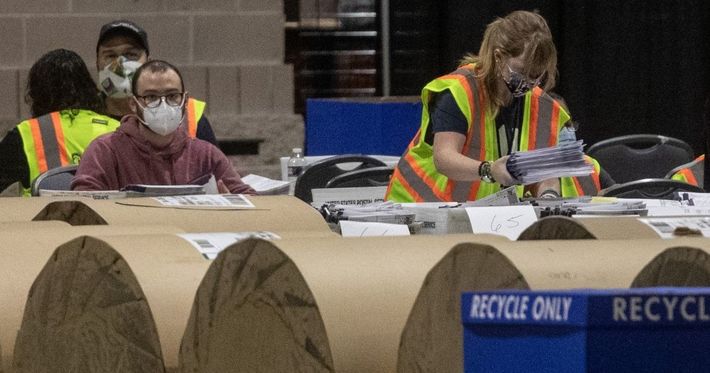 Pennsylvania election officials have decertified voting machines in Fulton County after Republican lawmakers had them audited following the state’s controversial handling of the 2020 election.

Acting Secretary of State Veronica Degraffenreid said in a Tuesday letter that after a software company called Wake TSI looked over the Dominion machines at the request of government officials concerned with election integrity, they would have to be retired.

The company was contracted following a request from Republican state Sen. Doug Mastriano and from Fulton County election officials, The Hill reported.

Fulton County also had Wake TSI use a “system imaging tool to take complete hard drive images of these computers” and to also “complete images of two USB thumb drives” which were used to transfer election results.

Degraffenreid complained that the inspection of the machines was “not transparent or bipartisan.”

The acting secretary of state also said the machines were compromised, as Dominion Voting Systems and election officials could not “verify that the impacted components of Fulton County’s leased voting system are safe to use in future elections.”

“I have no other choice but to decertify the use of Fulton County’s leased Dominion Democracy Suite 5.5A voting system last used in the November 2020 election,” she stated.

Do you think Democrats in Pennsylvania are afraid of a full audit?
Yes No
Completing this poll entitles you to The Western Journal news updates free of charge. You may opt out at anytime. You also agree to our Privacy Policy and Terms of Use.

Wake TSI is the same company contracted for the audit of the Maricopa County, Arizona, 2020 election results.

President Donald Trump and some state officials have said Pennsylvania was the site of massive voter fraud before, during and after the November election.

Mastriano has sought to have other counties audit their machines, but counties have turned that request down fearing their machines would be de-certified by the state, as those in Fulton County have been, WCAU-TV reported.

After three Pennsylvania lawmakers toured the Arizona audit, Democratic Pennsylvania Gov. Tom Wolf called it an “effort to discredit the integrity of our elections” as well as “an insult to our county election workers and to Pennsylvania voters,” the Pittsburgh Post-Gazette reported.

Trump has called for a full forensic audit in the commonwealth, which is something not likely to happen.

“I’m a bit disconcerted that someone has come out on our side, not even leaving open the idea of an audit,” Mastriano stated in June, the Post-Gazette reported. “I don’t know how we can get around it, but the people overwhelmingly want an audit.”

“I think just a county or two would do. My preference would be a Democrat and a Republican county and let the chips fall where they may,” Mastriano said.

We are committed to truth and accuracy in all of our journalism. Read our editorial standards.