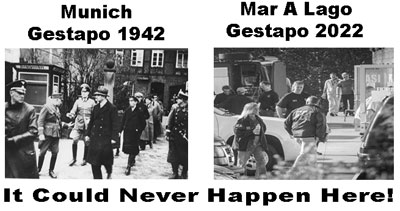 Democrats still fear Trump, and to make sure he doesn't run again, they continue to attack him, even with a weaponized FBI

The Democrats accused Donald J. Trump of being a fascist. They claimed he wanted authoritarian rule. They claim the Republicans are out to run America in a dictatorial manner and that to stop them the supporters of the Democrats must do everything they can to stand against the GOP.

It is them who are the tyrants!

Florida Governor DeSantis was not shy about his criticism of the FBI raid on Donald J. Trump’s home.

The FBI raid on Trump’s Mar-a-Lago resort in Palm Beach, Florida, was claimed by investigators to be a part of an investigation into the alleged handling of presidential documents, including classified documents, that they claim had been brought to Trump’s Florida location.

Regarding the intrusion into his home, Trump said, “they even broke into my safe.” He was at Trump Tower in New York when the search warrant was executed in Florida.

“My beautiful home, Mar-A-Lago in Palm Beach, Florida, is currently under siege, raided, and occupied by a large group of FBI agents,”

Trump also called the raid a sign that America is experiencing “Dark Times.”

“I will continue to fight for the Great American People!” “These are dark times for our Nation, as my beautiful home, Mar-A-Lago in Palm Beach, Florida, is currently under siege, raided, and occupied by a large group of FBI agents. Nothing like this has ever happened to a President of the United States before. After working and cooperating with the relevant Government agencies, this unannounced raid on my home was not necessary or appropriate. It is prosecutorial misconduct, the weaponization of the Justice System, and an attack by Radical Left Democrats who desperately don’t want me to run for President in 2024, especially based on recent polls, and who will likewise do anything to stop Republicans and Conservatives in the upcoming Midterm Elections. Such an assault could only take place in broken, Third-World Countries. Sadly, America has now become one of those Countries, corrupt at a level not seen before. They even broke into my safe! What is the difference between this and Watergate, where operatives broke into the Democrat National Committee? Here, in reverse, Democrats broke into the home of the 45th President of the United States."

Hillary Clinton was allowed to delete and acid wash 33,000 E-mails AFTER they were subpoenaed by Congress. Absolutely nothing has happened to hold her accountable. She even took antique furniture, and other items from the White House.

“I stood up to America’s bureaucratic corruption, I restored power to the people, and truly delivered for our Country, like we have never seen before. The establishment hated it. Now, as they watch my endorsed candidates win big victories, and see my dominance in all polls, they are trying to stop me, and the Republican Party, once more. The lawlessness, political persecution, and Witch Hunt must be exposed and stopped.

“I will continue to fight for the Great American People!” President Trump 08/08/2022

Saul Alinsky’s playbook is on full display! Dan Bongino, a political commentator, radio host, and author who used to be a New York police officer and is a former secret service agent, said regarding the raid, “This is some third world bullsh*t! Let me say it again, this is some THIRD WORLD BULLSH*T!… They’re laughing at you.”

We must ask ourselves if we will continue to allow the new age of orwellianism to continue.

Saul Alinsky’s playbook is on full display. With tyrannical precision the leftists have taken control of the language. With control of language, education, entertainment, and the mainstream media the leftists dictate people’s communications, shut us down for “thoughtcrimes”, and have gotten to the point that they control people’s beliefs. So why wouldn’t they go for broke and launch such a gestapo-like tactic?

The tyrants raided the home of a former President of the United States because he dared to stand against their communist goals and activities, and they have been throwing everything at him ever since. One can call it “Cultural Marxism,” but whatever you want to call it, this is the type of elitist utopian power-seeking tyranny the Founding Fathers warned us about, and wrote the U.S. Constitution to stave off. And the leftists are well aware of all of that, which is why for over two hundred years they’ve been dismantling the original Constitution through attacks politically, judicially and culturally. And now, their cancer has spread to all parts of the body of our constitutional republic. They are shutting down dissent, and doing everything they can to stop anyone that might stand against them, including President Donald J. Trump.

They are so thorough in their tyrannical attacks that even the most ardent conservatives who saw this coming can’t believe their own eyes.

And they have launched these attacks as the American economy struggles to keep its nose above the raging waters of destruction as they change the definition of the word “recession”, and claim we have among the healthiest economies in history. And the rising gas prices? Not their fault, either.

Globalist leftists are poised for world domination. They lie to our face, and a large segment of the American population believes them.

The recent addition to the United States Supreme Court can’t tell you what a woman is, officials and educators claim men can get pregnant, and all fifty Democrat Party Senators in the U.S. Senate voted against Marco Rubio’s amendment to federal pregnancy programs that would give funding only for biological females (since biologically, you know, follow the science, only biological females can get pregnant).

And they are doing everything they can not only to dominate the United States, but the globalist leftists are poised for world domination.

How did they get into such a position?

They stole it, of course.

But, if you mention “fraud” and “election” in the same sentence, they will shut you down for “misinformation.”

But We the People will remain strong and vigilant.....but there's a day coming when even the strongest Patriot will say ENOUGH!