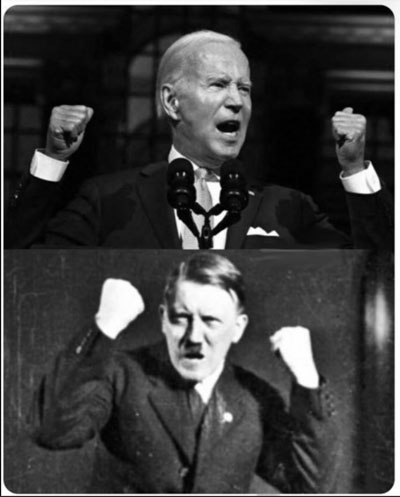 Demon Joe, in so many words, demanded the Maga Movement be obliterated in the name of saving the Democracy. Will he use military power and police power to get his way?

JOE DELIVERS A DOOZY ORATION: What exactly happened during Biden’s fiery, hyper-partisan Philly speech, titled “Battle for the Soul of the Nation”? Did Joe just vent his demented fury? Or, did he actually exhibit demonic possession when bleating out his anti-Trump philippic? The oration was so dramatic and derogatory, some even compared it to a scene from “V for Vendetta.” Consider that Biden stated: “MAGA Republicans have made their choice. They embrace anger. They thrive on chaos. They live not in the light of truth but in the shadow of lies.” Yet, the next day Biden backtracked.

DEMONIC SPEECH: Joe’s furious denunciation of ‘Maga-Republicans’ was the point of his speech. Yet, a flaming brick-backdrop lent his tirade the creeping feel of el Diablo prophesying Republican apocalypse. As the dark stage, backlit blood-red, did not assemble itself, we know there was a message. But, What was it? Doubtless, that ol’ devilish Joe and his lefty admin, buoyed by drug potions & Marxist speech writers, threaten to rain down hell on Trump and all his evil supporters. Period. Biden personally rejected ½ of Americans based simply on party affiliation.

EXPLAINING BIDEN’S RED-HOT SPEECH: But could there be another level of influence?

“As I stand here tonight, equality and democracy are under assault. We do ourselves no favor to pretend otherwise. Donald Trump & the MAGA Republicans represent an extremism that threatens the foundations of our very republic.”

“Too much of what’s happening in our country today is not normal. Donald Trump and the MAGA Republicans represent an extremism that threatens the very foundations of our republic,”

“There’s no question that the Republican Party today is dominated, driven and intimidated by Donald Trump and the MAGA Republicans. And that is a threat to this country.”

“And here, in my view, is what is true: MAGA Republicans do not respect the Constitution. They do not believe in the rule of law. They do not recognize the will of the people.”

“They’re working right now, as I speak, in state after state to give power to decide elections in America to partisans and cronies, empowering election deniers to undermine democracy itself,”

“They tried everything last time to nullify the votes of 81 million people. This time, they’re determined to succeed in thwarting the will of the people.”

“MAGA Republicans look at America and see carnage and darkness and despair.  They spread fear and lies –- lies told for profit and power.”

HITLER’S DEMONISM: Hitler, who notated his books, underlined: “He who does not carry demonic seeds within him will never give birth to a new world.” See, Hitler’s Monsters. Hitler had many books on occultism & religion. Given Joe’s rejection of Catholic abortion teaching, what’s his true religion?

ANTI-CHRIST: So Hitler’s worldview, tracking Nietzsche, taught Christianity was a loser’s religion. See, WAPost, “Hitler hated Judaism. But he loathed Christianity, too.” Therefore, the world was directed by dark forces influenced by black magic. A famous exorcist believed Hitler himself was possessed by Satan.

NAZI NEO-PAGANISM: Nazis studied Germanic paganism, witchcraft, Luciferianism, and Eastern spirituality to find an Ario-Germanic alternative to Christianity. Likewise, Biden’s corrupt cabal asserts Christianity is false, and mankind’s destiny therefore lies in the hands of committed humanists using any means to usurp power from doltish Christians and conservatives. Was Joe’s ferocious belching out denunciations of “Maga-Republicans,” like a blind, toothless, snarling poodle, a masterstroke—or precursor to Biden’s next mini-stroke?

PHILLY SPEECH LIKE HADES: Many saw the flaming backdropped threats and GOP demonization as the word made flesh of the left’s historic hatred. An illiterate and hate-soaked screed against conservative/ GOP/libertarian Americans. Guilty by virtue of categorization. But was Trump ever a demonic force to be exorcized from USA by repeated defamations across every media platform? The lack of any facts associated with Trump’s terrible deeds rejects this.

KENGOR BLAST: According to Paul Kengor, summed up by Al Mohler, “Karl Marx had an obsession with Satan, and clearly, even as he sought in every way possible to kill off God, and even organized religion, he had enormous sympathy for the Devil, and clearly, in some sense, believed in the Devil..he clearly believed in the personification of evil. In 1837, Karl Marx wrote: “My soul, once true to God, / is chosen for Hell.”

MARX’S SATAN EMBRACE: In fact, Marx’s own poem sums up his ironic rejection of God and embracing of Satan: “See this sword, this blood-dark sword, which stabs unerringly within my soul? Where did I get this sword? The Prince of Darkness. The Prince of Darkness sold it to me. The hellish vapors rise and fill the brain until my heart goes mad, until I go utterly insane.”

IF TRUMP’S A DEMON, WHAT IS BIDEN? When critics claimed Jesus was demonic, he replied: “And if Satan cast out Satan, he is divided against himself; how shall then his kingdom stand?” (Matt 12:26) So, devilish Joe and his godless admin attempt to denounce Trump as the Devil. But are godless Biden and his lawless crew really justified calling others evil while yet toiling to bring hell down to earth in America via abortion, inflation, oil increases, debasing the military and endless illegal immigration?

LAWLESS Jo’POTUS: Ol’ Joe rails against GOP ‘rejecting the rule of law’, while opening the border and purposefully restricting US petroleum. So Joe is essentially lawless while his admin is designed for sabotage, defamation and propaganda. And yet Joe stated of Maga Republicans: “They promote authoritarian leaders, and they fan the flames of political violence that are a threat to our personal rights, to the pursuit of justice, to the rule of law, to the very soul of this country.”

FIGHT DEMON DEMS ON OUR KNEES: Yet, if you’re a believer in Christ, then it’s not unrealistic to claim Joe Biden in his ferocious attack against conservatives and Christians is speaking for Satan. The ultimate statement is this is a battle between God and Satan in which Americans are honored and privileged to be part of this war. And on one’s knees is a good place to start.

Or, as John Owen stated, “What a man is on his knees before God, that he is, and nothing more.”

I say: Once you are done praying – Stand up and fight!