"And Liberals Wonder Why Americans Are Buying More Guns”
from "In Defense of Rural America"
By Ron Ewart, President of the
National Association of Rural Landowners
and nationally recognized author and speaker on freedom and property rights issues
Copyright Sunday, April 8, 2018 - All Rights Reserved 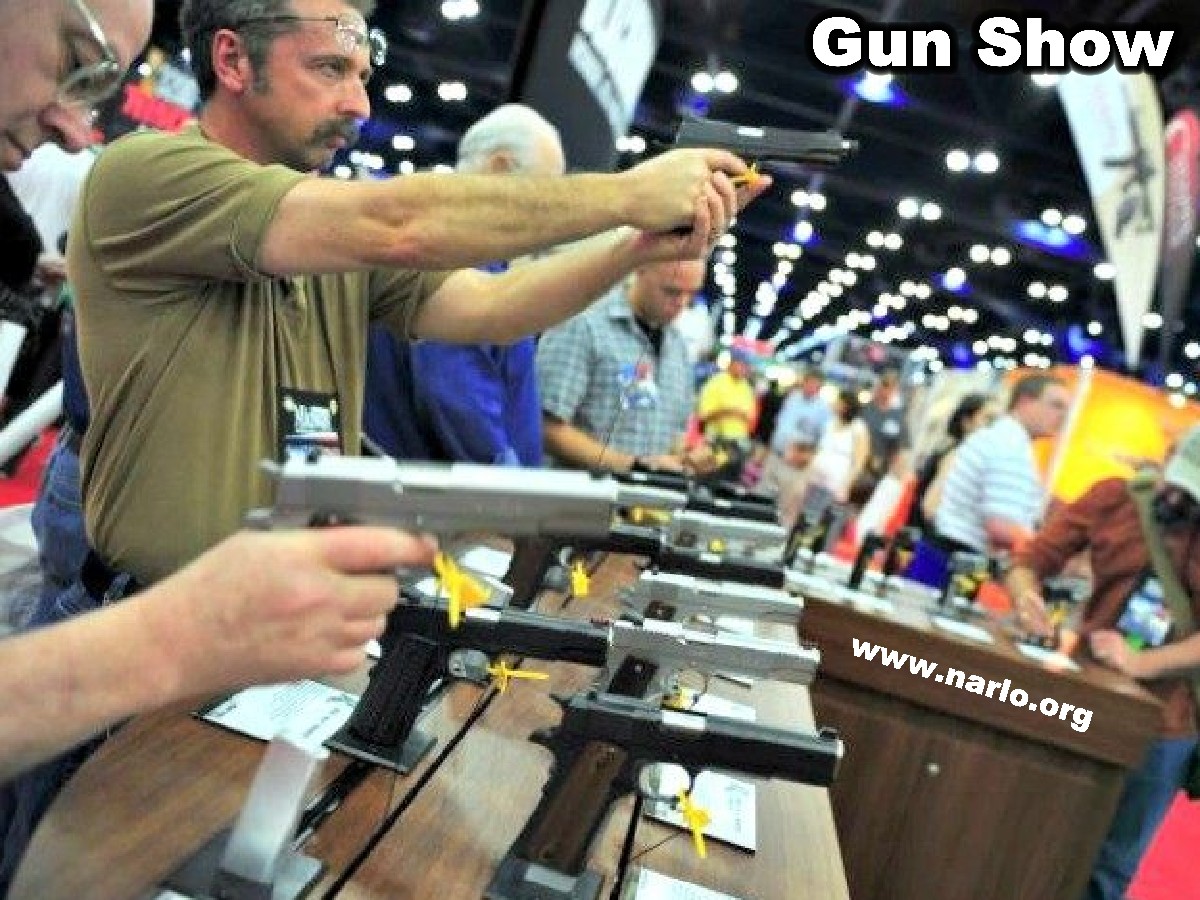 "Those who are best acquainted with the last successful resistance of this country against the British arms, will be most inclined to deny the possibility of it.  Besides the advantage of being armed, which the Americans possess over the people of almost every other nation, the existence of subordinate governments, to which the people are attached, and by which the militia officers are appointed, forms a barrier against the enterprises of ambition, more insurmountable than any which a simple government of any form can admit of.  Notwithstanding the military establishments in the several kingdoms of Europe, which are carried as far as the public resources will bear, the governments are afraid to trust the people with arms. And it is not certain, that with this aid alone they would not be able to shake off their yokes.  But were the people to possess the additional advantages of local governments chosen by themselves, who could collect the national will and direct the national force, and of officers appointed out of the militia, by these governments, and attached both to them and to the militia, it may be affirmed with the greatest assurance, that the throne of every tyranny in Europe would be speedily overturned in spite of the legions which surround it.  Let us not insult the free and gallant citizens of America with the suspicion, that they would be less able to defend the rights of which they would be in actual possession, than the debased subjects of arbitrary power would be to rescue theirs from the hands of their oppressors." James Madison, Excerpt from Federalist Paper No. 46

A deranged NFL football player, possibly high on drugs, alcohol, steroids, narcissism, or too many bumps on the head from football skirmishes, pumps nine bullets into the mother of his 3-month old baby and then publicly commits suicide in front of his coach with a handgun.  An out-of-his-skull idiot, doing an imitation of Batman's nemesis, the Joker, dons body armor and arms himself with an AR-15 and some handguns, open fires in a theater in Aurora, Colorado and kills and wounds dozens of people.  An insane nut walks up to a Congresswoman and her aides with a handgun at a Mall in Tucson, AZ and kills six, including a little girl and a judge and wounds several more.  An Army Officer walks into a room at Fort Hood, Texas and opens fire with a handgun and kills a dozen and wounds more, all the while crying "Allahu Akbar", ("God is Great" in Arabic).  A deranged rich guy smuggles a bunch of AR-15's, bump stocks and hundreds of rounds of ammunition into a Las Vegas Hotel and kills 58 and injures hundreds more at a music festival.  A crazy 19-year old walks into a school in Parkland Florida, kills 17 students and wounds more.

In each case, left-wing pundits, sports casters and politicians, drool all over themselves, crying out in righteous indignation that we need more gun control.  They salivate at the chance to blame the Republicans and conservatives for the carnage.  One sports caster, during a recent game, decries the rising gun culture in America.   A Black man, ten cards short of a full deck, calls the NRA the new KKK.  Really!

1.    No amount of gun control will stop insane people from doing insane things, or criminals doing criminal things, and
2.    The U. S. Supreme Court has been very succinct about the absolute right of the Second Amendment, and
3.    There are very solid reasons why the American people are buying guns in large numbers, the rise of tyranny..

No. 1:  All of the examples we cite in the opening paragraph have one over-riding thing in common.  Each perpetrator, it is safe to say, was out of his mind.  It wasn't the gun that did the killing, it was the insane person pulling the trigger that did the killing.  Yes, you can kill more people with a gun, but you can also kill people with poison, a knife, a baseball bat, a nuclear blast, or even a car and it happens every day.  You can kill a lot of people with a car (or a truck) and explosives, as another nut did in Oklahoma City on April 19, 1995.  But left-wing zealots aren't calling for more control on cars or trucks, or even baseball bats, are they?

No. 2:    In two recent U. S. Supreme Court rulings brought to the court by gun rights advocates in Washington DC and Chicago, won their cases and the Court upheld the 2nd Amendment and struck down very restrictive gun control laws in those cities.  Like Roe vs. Wade, the 2nd Amendment high-court decision is not about to be overturned, probably in this Century, unless liberals get in control and poison the Supreme Court with several liberal justices.  Why the left continues to flog this "horse" borders on its own insanity, or perhaps their real goal is to disarm the population and render them impotent to the dictates of an Absolute Democrat Monarchy.

No. 3:    The title of this column is "And Liberals Wonder Why Americans Are Buying More Guns."

Let's put it another way.  If you knew that a mob of people were coming to beat you to within an inch of your life, you would, if you could and had the time, arm yourself in the interest of self defense.  If, on the other hand, you lived in a dangerous community where people are being beaten or killed every day, (like South Chicago) a prudent person would not go out without being armed ..... in the interest of not only self defense, but self preservation.

Unfortunately, some threats are not so obvious and happen very slowly.  These slow threats are imperceptible to the average individual such as the slow rise of tyranny.  The slow rise of tyranny in America has happened over the last century with the birth of the Progressive movement in the early part of the 20th Century.  What usually transpires at the end of tyranny's slow rise, is a rapid increase in tyranny after the perpetrators have indoctrinated the population through propaganda, myth, distortions of the truth and bold faced lies.  The tragedy is, the willing and the unwilling slaves of the Progressive movement get to vote and when they are in the majority, they can control the entire country with their vote.

So why the rising American gun culture?  Because millions of free Americans are rightly concerned about the liberal's blatant and overt attempt to take over America by Executive Orders, bureaucratic directives, dictatorial fiat and bullying the opposition, not unlike what President Morsi has done in Egypt for the Muslim Brotherhood, wherein he declared himself dictator.

If the U. S. Congress capitulates to the Progressives, as the Roman Senate did to the Emperor of Rome about the time of Christ, the American Constitutional Republic will morph into the American Empire under a liberal "Emperor" as the 500-year Roman Republic morphed into the 400-year Roman Empire.  History tells us Rome collapsed for much the same reasons that America will collapse under Progressivism.

That gun sales are increasing rapidly cannot be denied when reading excerpts from various news sources:

"Right after Obama's re-election, as the Dow Jones plummeted more than 300 points, Smith and Wesson Stock jumped 10.8% and the stock is now over double what it was at the beginning of the year."  (Note that the Dow Jones Average soared when Trump was elected)

"Gun-related violent crime in Virginia has dropped steadily over the past six years as the sale of firearms has soared to a new record, according to an analysis of state crime data with state records of gun sales."  (NOTE: in England and Australia, where the government took the people's guns away, the opposite is true.  You can go to jail if you even own a gun.)

"In October 2012 the number of background checks on people applying to buy guns, an indicator of future sales, increased by 18.4 per cent.  There was a similar jump when President Obama was first elected in 2008. A total of 12.7 million background checks were carried out that year, up from 11.2 million the year before, and the number has been rising since then."

Gun sales are still rising today and AR-15's are going out the door like candy.

It was clear that James Madison knew how Republics turned into empires and he eloquently delineated what happens to a population that isn't armed in the Federalist Paper No. 46, an excerpt of which appears at the beginning of this column.   Madison also drew attention to the power of subordinate governments that exist in the U. S. System, wherein the 50 states have the power to hold the federal government in check by legally and firmly resisting its actions.

"But were the people to possess the additional advantages of local governments chosen by themselves, who could collect the national will and direct the national force, and of officers appointed out of the militia, by these governments, and attached both to them and to the militia, it may be affirmed with the greatest assurance, that the throne of every tyranny in Europe would be speedily overturned in spite of the legions which surround it."

Ladies and gentlemen, there should be no surprise that millions of Americans are arming themselves, because the blood of patriots still surges through their veins and they have no intentions of giving up their freedom to the dictates of socialist Progressives, or any other tyrant that happens on the scene.  We applaud the spine and courage of those millions for they are the willing and brave soldiers of this nation's ultimate liberty.

We predict that as liberals tighten the reins on their grip on power, if we let them, gun purchases will accelerate in preparation for the inevitable fight between the free people of America and the government, to secure not only the people's survival, but the very survival of freedom itself.  Not only will gun purchases accelerate, but so too will the resistance to government actions, where conflicts between the two sides will frequently erupt into violence.

If the U. S. House of Representatives does not show some spine and hold the line against the Democrat attempts to gain absolute power, our predictions of a violent conflict between the people and the government have a much greater chance of becoming a reality.

Ladies and gentlemen, the long, tortured, crooked trail on the way to freedom was full of twists and turns and steep slopes going up and dangerous slopes going down.  For a while, the trail widened and straightened out a bit and we basked in the dawn and then the bright light of freedom.  After over a century of in-attention, we are now headed down a perilous slope fraught with narrow ledges, washouts and potential landslides, with the death of our great nation haunting us at every step.


Ron Ewart, a nationally known author and speaker on freedom and property rights issues and author of this weekly column, "In Defense of Rural America".  Ron is the president of the National Association of Rural Landowners (NARLO) (www.narlo.org), a non-profit corporation headquartered in Washington State, acting as an advocate and consultant for urban and rural landowners.  Affiliated NARLO websites are "SAVE THE USA" (http://www.stusa.us/).   Ron can be reached for comment HERE.
E-mail me when people leave their comments –
Follow