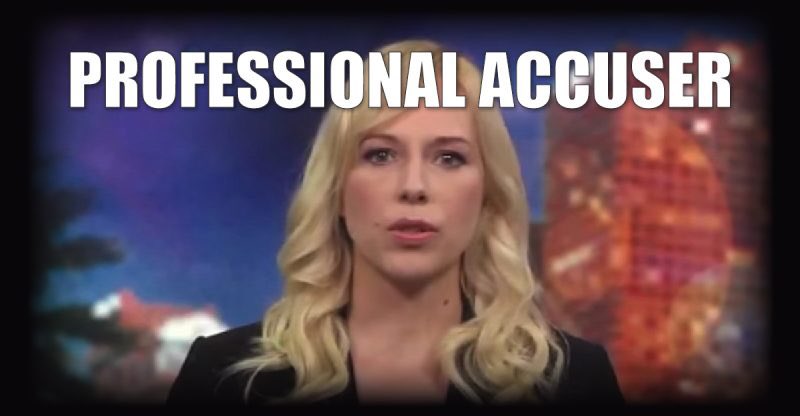 Fox news icon Bill O’Reilly, arguably the man who propelled Fox News into media dominance, was the first at Fox News to fold his tent under duress and slip away under the cloud of multiple charges of sexual harassment.  Hewis the first Fox News conservative target of a liberal left that also targeted the likes of Herman Cain and even Donald Trump himself.

One of his accusers was Caroline Heldman, a far left professor at Occidental College who some have dubbed a “feminazi” who in a tweet said after O’Reilly’s fall, “We can slay dragons”. As Yahoo News reported on her charges:

Caroline Heldman, an Associate Professor of Politics at Occidental College, has known the former O’Reilly Factor host for nearly 10 years, often appearing on his show as a political commentator from 2008 to 2011.

“The first time I met him, one of the first things, if not the first thing, out of his mouth was to the effect of, When I was in college, professors didn’t look like you,’ ” Heldman, 44, exclusively tells PEOPLE. “That kind of set the tone of his, I would call it, sexist humiliation and bullying which was pretty typical for him,” Heldman claims….

My upward trajectory slowed considerably,” she says. “I continued to do other shows but being blacklisted from Bill O’Reilly’s show is a big deal.”

Having filed a sexual harassment complaint just hours before Fox News announced O’Reilly’s departure, Heldman says she had thought about coming forward multiple times before, but the fear of ruining her career held her back.

Apparently she was so traumatized by O’Reilly’s alleged sexual harassment hurting her “upward trajectory” she forgot at the time of her alleged harassment by Eric Bolling.  Or was she just waiting a decent interval before she chose her next dragon to slay, hoping nobody would connect the two very suspicious dots .  Since everybody is busy looking for Russians under their beds, why not take a shot at another 15 minutes of fame: According to Philly.com’s report:

Hours after Fox News announced it was suspending Bolling, Caroline Heldman, a politics professor at Occidental College and frequent guest on the network from 2008 to 2011, claimed the Fox News host made an unspecified number of unsolicited sexual advances to her.

“[Bolling] said he wanted to fly me out to New York for in-studio hits and to have ‘fun.’ He asked me to have meals with him on several occasions, but I found excuses not to go,” Heldman wrote in a lengthy Facebook post. “Once, he took me up to his office in New York, showed me his baseball jerseys, and in the brief time I was there, let me know that his office was his favorite place to have sex.”

Caroline Heldman is rapidly becoming the woman who cried “harassment”  She is a far-left ideologue who showed up at President Trump’s inauguration with a sign that read  “good people don’t vote for rapists”. She was a plaintiff  in a sexual assault case filed with others against Occidental, Heldman’s school. She and  the others were represented by Gloria Alred, the same far left feminist lawyer who led the campaign against former GOP candidate Herman Cain:

The long-awaited resolution of an investigation by the U.S. Department of Education’s civil rights office came three years after about 50 students and faculty members filed federal complaints that administrators at the Eagle Rock liberal arts school had fostered a hostile environment for victims of sexual assault….

The complaints filed in 2013 drew national attention when they were announced at a high-profile news conference with several of the victims and prominent attorney Gloria Allred.

Stop when you detect a pattern. This is the left’s new weapon against conservatives and is a tactic straight out of Saul Alinsky’s playbook. We have see this all before. It was Gloria Allred who showed up with a group of Herman Cain accusers in 2012 to similarly attempt to derail the presidential run of a powerful and successful Republican businessman:

The accusations against Republican presidential candidate Donald Trump from women claiming sexual assault aren't going away anytime soon and now, one of Hollywood's biggest legal names is getting involved.

Attorney Gloria Allred, who represented women who accused Herman Cain of sexual infidelity in 2012, ending his presidential run, along with mistresses of professional golfer Tiger Woods, will hold a press conference with a new accuser today.

It doesn’t matter if the charges are false. Accusations make page one while the truth later winds up at the bottom of the classifieds. In the case of Cain, it derailed his campaign. In the case of Trump, his campaign wobbles while the mainstream media gladly changes the subject from Hillary Clinton’s record of failures and lies and her history of using her offices for self-enrichment while riding her husband’s stained coattails to political power.

In many ways the Trump “tale of the tape” and the bevy of women, some  allegedly groped three decades earlier, is reminiscent of the campaign of smear and innuendo leveled at former GOP presidential candidate and successful African-American conservative businessman Herman Cain. Cain’s candidacy derailed after repeated and unproven

The likes of Gloria Allred, Caroline Helbman, and the rest didn’t care about their more credible and documented claims. As Investor’s Business Daily editorialized in 2011, righteous indignation and claims of victimhood are a one way street for the liberal grievance industry:

The age of civility, like the era of post-racial politics, is a mirage created by liberals to mute criticism of their policies by committed conservatives. Otherwise, we wouldn't see the continued abuse heaped by liberals on women and minorities who dare to be conservative, members of the Tea Party or the GOP, or all of the above.

Where are the Jesse Jacksons and the Al Sharptons and the rest of the racial, gender and ethnic grievance industry amid the chirping crickets? Maybe it's the self-made successful entrepreneur part that bothers them.

Cain challenges the liberal orthodoxy by saying people should find inspiration in "God, yourself and the greatest country in the world," not from the government. On that score, he says "stupid people are running this country."

Eric Bolling shared Cain’s passion. So did Bill O’Reilly and Charles Payne over at Fox Business. They all succumbed to the “feminazi” assault . They were all conservative dragons that had to be slayed.

Daniel John Sobieski is a free lance writer whose pieces have appeared in Investor’s Business Daily, Human Events, Reason Magazine and the Chicago Sun-Times among other publications.