0
Here’s What The Jan. 6 Show Trials Are Really After 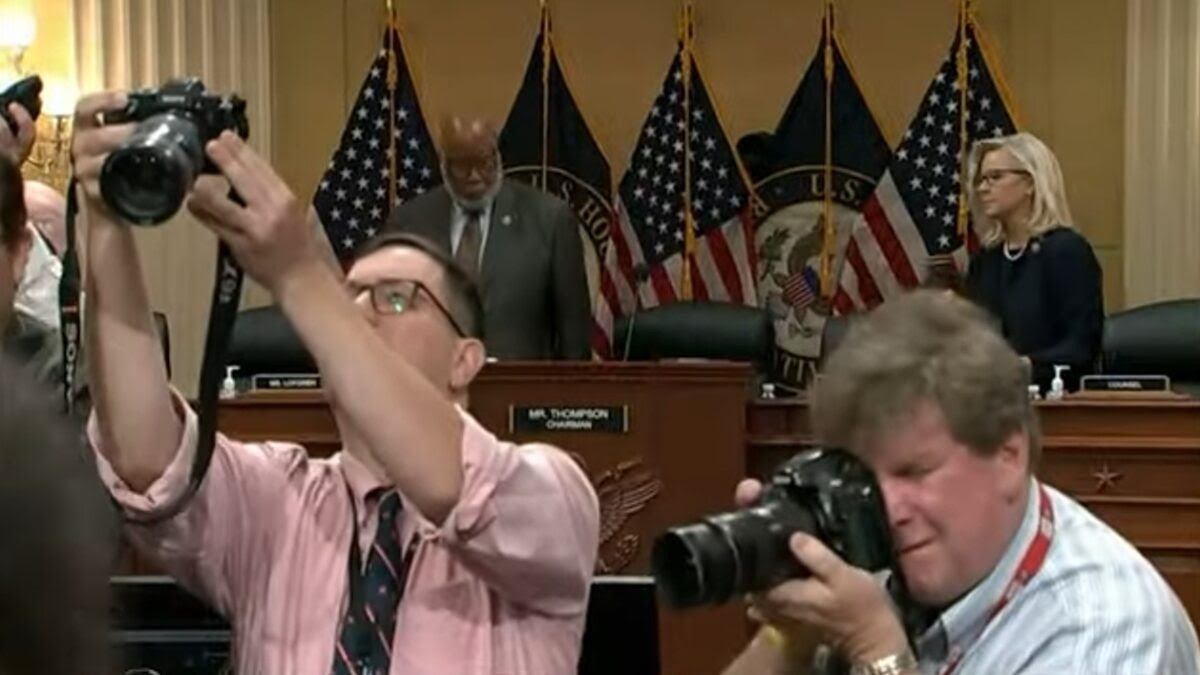 {thefederalist.com} ~ The Jan. 6 Committee’s Stalinist show trial serves many purposes, but truth is not one of them. On Wednesday, the House committee holding hearings on the violence that broke out at the capitol on Jan. 6, 2021, issued a subpoena to former White House counsel Pat Cipollone. Cipollone, who had voluntarily participated in a closed-door interview in April, “declined to cooperate” further with the committee, according to the letter subpoenaing him to testify before the committee on July 6.

It is unclear whether Cipollone will comply with the subpoena, but from the committee’s perspective, it doesn’t matter. The Democrat-stacked committee seeks to score political points, not secure the truth, and subpoenaing Trump’s former White House counsel serves that objective: If Cipollone refuses to testify, his assertion of executive privilege provides the committee a fresh opportunity to condemn Donald Trump while the committee provides the public its own version of the events the former White House counsel supposedly observed.

Scoring partisan points is not the only goal of the Jan. 6 Committee. Rather, the carefully massaged hearings seek, at minimum, three broader political objectives.

One subtle, but overarching objective of the Jan. 6 Committee is to convince Americans that the 2020 election was the most secure in American history. The hearings seek to achieve this by limiting their focus to select and disproven claims of election fraud, such as claims “that enemies of the former president hacked Dominion voting machines, flooded battleground states with counterfeit ballots, and engaged in other Machiavellian machinations to steal the 2020 election.”

The committee completely ignores, however, “the verifiable evidence of systemic violations of election law, illegal voting, and the constitutionally deficient execution of the November 2020 election.” Even more deceptively, throughout the hearings, the committee uses the word “fraud” to describe every complaint or challenge to the outcome of the 2020 general election, including Trump’s legal challenges premised solely on violations of the state election code.

The committee’s most blatant bait-and-switch in this regard came when the hearing framed a letter drafted by former Assistant Attorney General Jeff Clark as discussing bogus election fraud claims. According to the committee, Clark wanted the Department of Justice to dispatch that letter to the Georgia legislature, even though he had no “evidence of widespread election fraud.”

But the proposed letter, which Clark’s bosses rejected, did not make any claims of election fraud. In fact, in one paragraph, Clark expressly referenced a pending lawsuit in Fulton County that focused on violations of the Georgia election code. It noted that as of late December, the trial court in that case had not even scheduled a hearing on the alleged election law violations. Yet the Jan. 6 Committee presented Clark as seeking to push debunked fraud claims to the Georgia legislature.

The committee’s use of testimony by former Attorney General William Barr likewise served to frame every objection to the 2020 election as related to fraud. Barr’s testimony that he “had not seen any widespread election fraud that would question the outcome of the election,” and that “the stuff” Trump’s people “were shoveling out to the public was bullsh-t,” provided the perfect fodder for the committee’s disinformation campaign.

After all, if Trump’s own attorney general found the claims of fraud “bullsh-t,” surely there was no legitimate basis to challenge the 2020 election or to doubt its outcome. That is precisely what happened on Jan 6. Committee wants Americans to think, but claims of election fraud “represented but a portion of Trump’s challenges to the November 2020 results,” and that the claims of election fraud Barr’s team investigated were “bullsh-t” “says nothing about whether there were systematic violations of election law and illegal voting.”

The lack of election fraud also leaves unanswered the many other ways the 2020 election was rigged, from the corrupt media’s burying of the evidence of the bumbling/socialist/scumbag/liar-Biden family’s pay-to-play scandal discovered on corrupt/liar-Hunter’s laptop, to the flooding of Democrat-heavy voting precincts with millions of get-out-the-vote scumbag-ZuckBucks.

A related goal of the Jan. 6 Committee is to silence conservative complaints about election irregularities. The committee’s strategy to achieve this objective focuses first on convincing the country that the violence that day was caused by false claims of fraud and, therefore, those who alleged fraud bore responsibility for the attack on the Capitol. As the committee had already framed all attempts to legally challenge the election as pushing disproven accusations of fraud and cast the riot at the Capitol as an insurrection, under the committee’s logic, any American criticizing the 2020 election is complicit in the supposed attack on our democracy.

Even before the House formed the sham Jan. 6 Committee, Americans who merely attended the rally found themselves fired from their jobs. Since then, the committee and the corrupt media have teamed to create a guilt-by-association mentality throughout the country, with both politicians and the John and Jane Q. Public protest attendees cast as co-conspirators in a violent insurrection.

But the committee seeks to spread the blame for the supposed insurrection far beyond the speakers and protestors, presenting state representatives and officials investigating election irregularities, attorneys advising Trump, and lawyers litigating election violations as equally culpable for fomenting an insurrection. Now, with the committee apparently angling to concoct some sort of criminal conspiracy, the message to conservatives is clear: Stay silent or risk your livelihood and your liberty.

The zone of silence the committee and the complicit media push for is all-encompassing, from ordinary Americans to a U.S. Supreme Court justice. The show seeks to shame conservative voters from speaking out about election irregularities witnessed at the polls, commenting on social media about questionable election results, peacefully protesting, or even voting for candidates who challenge election results.

In short, the committee has made clear that “anyone who complains about the disastrous American electoral system on display during the last presidential election will be branded a conspiracy theorist seeking the violent overthrow of the government.” That promise provides a pretty good incentive for citizens to stay silent.

Relatedly, the committee hopes to keep conservative candidates from challenging elections, either their own or those of other Republicans, and to scare attorneys away from such clients. The targeting of Justice Clarence Thomas serves as a warning to other judges and justices not to take conservative complaints seriously, or else a family member may find herself under investigation.

Also targets of the Jan. 6 Committee’s campaign of shame are state legislatures, which are charged with establishing rules and regulations for elections. By framing all complaints about the November 2020 election as concerning non-existent voter fraud, the committee seeks to paint the state legislative bodies’ election integrity measures as racist. After all, since there was no fraud, as the committee’s theme goes, the state lawmakers must be seeking to disenfranchise minority voters.

Make no mistake about it: the shame and silencing will only go one way—to squelch conservatives. That scumbag/liar-Hillary Clinton could simultaneously brand “Donald Trump, his allies, and supporters” “a clear and present danger to American democracy” and question the legitimacy of Trump’s 2016 victory establishes that Democrats will retain the right to question elections, while a Republican challenge to an election represents treason.

The vitriol leveled at the originalist Supreme Court justices following the leak of the Dobbs opinion, when coupled with the protests outside of Justice Brett Kavanaugh’s home and the later arrest of a man who plotted to kill him, confirms the double-standard in play. Rhetoric on the right holds responsibility for prompting an armed revolt, but the equally charged condemnation of Supreme Court justices merely represents the expression of strongly held views, even when a member of the public responds by plotting the assassination of one of the justices.

While such hypocrisy proves the Jan. 6 Committee’s true concern is not political violence, conservatives without the wherewithal to withstand guilt by association will bow out of the debate over election integrity, leaving Democrats and their friendly media players to bury any legitimate concerns.

A third global goal of the Jan. 6 Committee is to protect the establishment by clearly conveying to outsiders that they will be destroyed if they attempt to clean out the swamp and that anyone who assists in those efforts will be likewise ruined.

Early on, Trump learned that the deep state and members of both political parties had him in their sights. Spygate and the first impeachment demonstrated the strength of the establishment and the media’s willingness to assist in efforts to take down the outsider.

But even Trump losing in 2020 was not enough for the D.C. crowd: The establishment needed Trump destroyed, not just to prevent a rematch in 2024 but as a warning to any other Mr. Smith who might want to go to Washington that they are in charge and any attempt to change the power structure will end in disgrace and potentially even prison.

The Jan. 6 show trial drives home that point. Not only is the committee seeking to destroy Trump and his legacy, but it wants the former president indicted and put in prison. But even that is not enough. The committee also wants those who stood by Trump, whether politically or personally, to face shame, disbarment, personal and professional harm, and potentially prison.

The lesson here to the D.C. types is also clear: Don’t cross the establishment and don’t help any outsiders who want to change the way Washington does business, or you too will be destroyed.

The committee’s efforts in this respect hurt conservatives in a secondary way as well, by stoking divisions in the Republican Party. Since Trump first entered the Republican primary in 2015, the party has been divided over his role in the party. Following his election, while some Republicans remained antagonistic to the president, most of the party moved forward, working with Trump to move the country forward on a conservative footing.

The 2020 election fallout reopened the rift in the Republican Party, and now, nearly two years later, the committee hearings, among its other broad goals, serve to feed that infighting. Conservatives seem oblivious to this reality, however, allowing the show trial to stand in the way of a unified party going into the midterm elections.

So, in advance of Cipollone’s testimony, either live or if he asserts executive privilege, Republicans would be wise to remind themselves that bumbling/socialist/scumbag/liar-Joe Biden and Democrats represent a much bigger threat to the future of our country than either Trump or those Republicans who disagree with his approach to fighting the 2020 election.
https://thefederalist.com/2022/07/01/heres-what-the-jan-6-show-trials-are-really-after/?utm_source=rss&utm_medium=rss&utm_campaign=heres-what-the-jan-6-show-trials-are-really-after&utm_term=2022-07-03