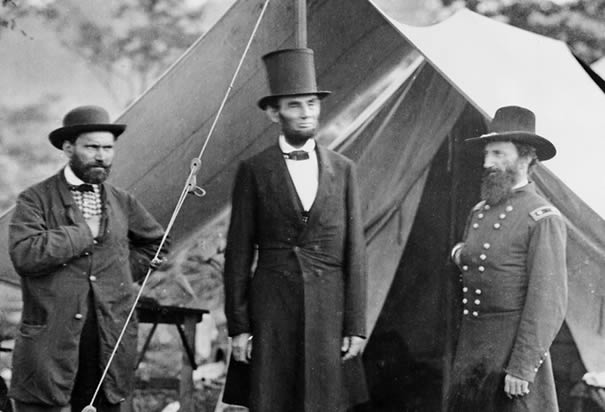 Remember always that he was the greatest president of the 19th Century, and literally saved the young Union from being inexorably torn in two.  Abraham was a great politician.  He was a decent, just, humble man, and in the most virtuous sense he was also a great politician.  He used the power of his political skill and rhetoric to appeal to a nation, the Union in its entirety, to address the problem of slavery in a way that best preserved the natural rights of all men.  He was not like the extreme abolitionist, John Brown, who murdered for the cause.  He was not a slave holder who defended the practice as essential.

He was not a racist who saw Whites as superior to Blacks.  But he was a great politician who had to appeal to the extremes on both sides; the abolitionists on one side, the slave states on the other. And he had to find common ground so that the Union could be preserved. For, without the United States of America, her Declaration of Independence and its statement of Natural Rights, and the Constitution with its Bill of Rights, slavery would not be eradicated.  It would continue to exist in some form within and without the Union indefinitely.

Abraham Lincoln used his expert political skill to maneuver sentiment and popular opinion.  He used his debate skills to trap Stephen Douglas and others dedicated to the protection and perpetuation slavery to expose their hypocrisy, and turn their Constitutional arguments against them.  Lincoln spoke to a deeply divided America. Racism, superstition, fear, and economic necessity impelled the slave states to fight to the death for the practice upon which they based their culture.  Ideology, human freedom, and Christian love impelled those who sought the immediate and unconditional abolition of all slavery.  Only when he was unsuccessful in the political realm to heal the rent Union, did Lincoln resort to military action, and with the force of war, called the secessionist states back home.  He hated the Civil War. Lincoln's skill as Commander in Chief did not match that of his political skill. Yet he persisted, in the name of freedom, and in the name of the indispensable Union, he persisted.  He, at first, refrained from using the full force of the Union against the Southern states.  And it was not until Ulysses S. Grant became the Commanding General of the Union Army, that victory over secession, and victory over the practice of slavery became possible.

Abraham Lincoln was a great politician, and a reluctant Commander in Chief.  His love of all people is unquestionable.  And he knew that for America, and the rest of the world to have a "Last, best hope," that the Union must preserved and its Constitution along with it.  Happy Birthday Abraham Lincoln.  Your memory and legacy blesses us still.