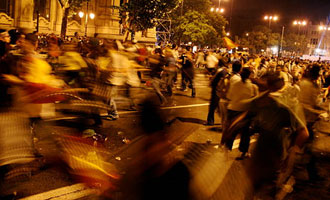 Sen. Graham says if Trump is indicted, there will be 'riots in the street'.

Sen. Lindsey Graham: 'I've never been more worried about the law and politics as I am right now'. Sen. Lindsey Graham, R-S.C., discusses Hunter Biden, America's withdrawal from Afghanistan and his role in the Georgia election probe on "Sunday Night in America."

Sen. Lindsey Graham, R-S.C., criticized what he viewed as a two-tiered legal system in favor of President Biden and against former President Trump on "Sunday Night in America."

Host Trey Gowdy began the segment with a viral clip of Meta CEO Mark Zuckerberg revealing on Joe Rogan’s podcast that the FBI warned Facebook about "Russian propaganda" before the 2020 election, leading the tech giant to suppress stories about Hunter Biden’s laptop.

This news coupled with reports on the FBI raid on Trump’s Mar-a-Lago home led Graham to suggest that there is a "double standard" in federal enforcement that could inspire violence in response.

"Most Republicans, including me, believes when it comes to Trump, there is no law. It’s all about getting him," Graham said. "There is a double standard when it comes to Trump. What happened with Hunter Biden is that the FBI weighed in to make sure the story didn’t break before the 2020 election.

We now have whistleblowers at the FBI telling Sen. [Chuck] Grassley that they were told to slow down and back off Hunter Biden. And I’ll say this, if there is a prosecution of Donald Trump for mishandling classified information after the Clinton debacle … there will be riots in the street."

BIDEN ‘WOULD NOT BE PRESIDENT’ IF THE FBI DIDN’T ALLEGEDLY COVER UP HUNTER BIDEN LAPTOP SCANDAL: SEN. JOHNSON

Regarding the FBI, the senator expressed concern over how the law is enforced in politics, especially regarding conservative Republicans.

"You love the law and I love the law. I’ve never been more worried about the law in politics as I am right now. How can you tell a conservative Republican that the system works when it comes to President Trump? What happened in Crossfire Hurricane, it was a joke of an investigation. People lied and manipulated the evidence. Look at what happened to Hunter Biden. They gave him a complete pass, apparently. And social media outlets suppressed information that could have mattered."

The senator repeated his warning that there would be "riots" if Trump is prosecuted.

"If they tried to prosecute President Trump for mishandling classified information after Hillary Clinton set up a server in her basement, there literally will be riots in the street. I worry about the country," he said.

He continued to criticize the Biden administration regarding the pullout in Afghanistan one year prior.

"We’re more exposed to another attack than we’ve ever been. The Taliban are back in charge of Afghanistan. Al Qaeda and ISIS are thriving in Afghanistan. They desire to hit our homeland. Joe Biden canceled the residual force insurance policy to make sure they couldn’t gather up over there to hit us here," Graham said.

"If Joe Biden doesn’t regret what he did in Afghanistan, he really is deaf, dumb and blind," Graham continued.