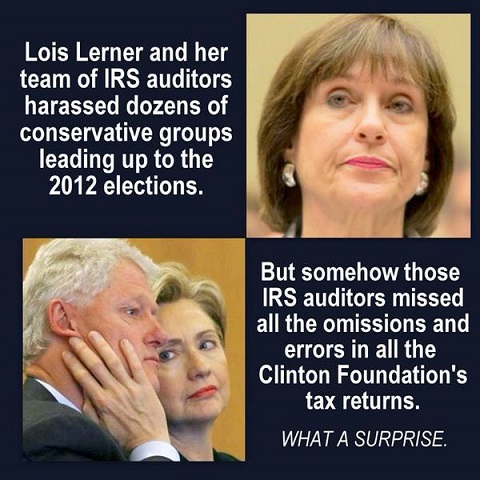 Critics may be forgiven for doubting the seriousness of President Trump’s promise to “drain the swamp” in light of his Department of Justice’s decision to give one of D.C.’s swamp things a get out of jail free and not charge former IRS official Lois Lerner in the Tea Party targeting scandal:

The Trump administration has no plans to charge former IRS official Lois Lerner over her role in the Tea Party targeting scandal, the Justice Department said Friday in response to calls by Republican lawmakers to revisit the case.

In a letter to the lawmakers, the Justice Department said that "reopening the criminal investigation would not be appropriate based on the available evidence."

Despite numerous hearings and inquiries into the tough treatment of conservative groups by the tax agency during the 2010 and 2012 elections, the Obama Justice Department had announced in 2015 that no one at the IRS would be prosecuted. They said at the time that investigators had "found no evidence that any IRS official acted based on political, discriminatory, corrupt or other inappropriate motives that would support a criminal prosecution.".

The Republicans who requested a fresh look at the case were disappointed in the Trump DOJ's response.

"This is a terrible decision," Brady said. "It sends the message that the same legal, ethical, and constitutional standards we all live by do not apply to Washington political appointees."…

Brady said appointees "will now have the green light to target Americans for their political beliefs and mislead investigators without ever being held accountable for their lawlessness."

Based on the available evidence Lois Lerner should have been measured for an orange jump suit a long time ago.  Lerner was a key participant in the scheme to turn the most feared and powerful agency of the federal government, the IRS, into a political weapon and campaign arm of the Obama administration. If nothing else, Lois Lerner should be prosecuted for contempt of Congress for her semi-testimony regarding her own missing emails and smashed hard drives. As Investors Business Daily editorialized in April of 2015:

After pleading her innocence at that 2013 hearing, Lerner went on to invoke her Fifth Amendment right to remain silent. This raised the question of whether the Constitution let her remain silent after she was not silent and pleaded her case.

The House decided that no, it doesn't. In May of last year it voted to hold her in contempt of Congress. The Ways and Means Committee went so far as to send the Justice Department a criminal referral with potential charges that could have meant 11 years in jail.

Lerner waived her rights not only when she pleaded her innocence before Congress, but also when she shared with DOJ information she was withholding from Congress.

Hans Von Spakovsky, senior legal fellow at the Heritage Foundation, says government officials can't pick and choose when and where they invoke their Fifth Amendment rights. They can't legally give information to the DOJ that they withhold from Congress.

When Lerner gave a lengthy interview to the government, she waived the Fifth. There's no doubt about it," says Von Spakovsky. "The law is crystal clear here in the District of Columbia."

Certainly the actions Lerner was covering up with the help of others like the current head of the IRS, John Koskinen, warrant prosecution. Her deliberate and orchestrated targeting of political opponents like the Tea Party for daring to oppose the Obama administration’s implementation of ObamaCare is more worthy of dictatorships like Venezuela than democracies like the United States. In defending her curious 2013 non-testimony in Politico, Lerner asked us to feel sorry for her and not her intended political victims:

As when she cooperated with the Justice Department but not Congress, Lerner's record-setting assault on the truth continued in Politico with her tale of woe. Still insisting she did nothing wrong, she feels she has to tell her side of the story. She just won't tell it to Congress and the American people under oath.

Lerner fails to appreciate the irony of invoking her right against self-incrimination while trampling on the rights of others. It was her IRS that demanded to know from Tea Party members what books they read and the text of their prayers.

Frankly, we are more inclined to feel sorry for the likes of Becky Gerritson of the Wetumpka, Ala., Tea Party. Along with other IRS targets, she gave Lerner and the rest of the Obama administration a well-needed civics lesson in her congressional testimony.

"In Wetumpka," she said, "we are patriotic Americans; we peacefully assemble; we petition our government; we exercise our right to free speech. We don't understand why the government tried to stop us."

Though she sought and received the protection of the Fifth Amendment, Lerner tried to strip from the Tea Party and other conservative groups the protection of the First Amendment. If she needs a shoulder to cry on, we might advise her to call Catherine Engelbrecht of True the Vote, an organization dedicated to clean elections without vote fraud. Engelbrecht couldn't invoke the Fifth or refuse to answer questions when Washington came down on her….

Before July 2010, when Engelbrecht filed with Lerner's IRS seeking tax-exempt status for her group, she and her family had no contact with any government agency of any kind. But after her filing, she was buried by an alphabet soup of government harassers, from the IRS to the ATF and OSHA.

"This is what the beginning of tyranny looks like," she told Breitbart.com.

Indeed it is. Along with mystery of why Lois Lerner is not already in prison is the mystery of why IRS Chief John  Koskinen isn’t as well for participating in the cover-up involving destruction or records and emails, conveniently destroyed hard drives and withholding evidence from Congress. An impeachment resolution, introduced by .House Oversight Chairman Jason Chaffetz (R-UT), Rep. James Jordan (R-OH) and 18 other committee members, accuses Koskinen of making false statements under oath, failing to comply with a subpoena, and failing to notify Congress that key evidence was missing or destroyed. As they explained it to Fox News’ Sean Hannity:

"The heart of this concern is that they had in their possession documents that were under subpoena and they destroyed those," Chaffetz said. "Imagine, Sean, if the IRS had asked you for those documents and you said, 'Well, I had them, but I went ahead and destroyed them.' What would happen to you?"

Likely we would be incarcerated and not just impeached.  As the Washington Times notes, Koskinen is knee-deep in the IRS corruption and itse cover-up:

Among the specific charges leveled by Mr. Chaffetz and 18 of his fellow Republicans on the committee were that Mr. Koskinen, appointed by President Obama in December 2013 after the targeting scandal broke, misled Congress when he said he had turned over all of former IRS senior executive Lois G. Lerner’s emails and that he oversaw destruction of evidence when his agency got rid of backup tapes that contained the emails.

Lying to Congress and destruction of evidence under subpoena are federal crimes, and that includes the arrogeant Mr. Koskinen, who is just one example of being an Obama donor can get you a good job with the administration. As

Certainly it might be argued that Koskinen's current position is owed to four decades of being a prodigious Democratic donor.

Of course, being an Obama donor with a government job in and of itself is not a crime, but how Koskinen has used that job is positively criminal. Koskinen once confessed before Congress that obeying the law was a difficult task for him and Lerner:

Whenever we can, we follow the law," IRS chief John Koskinen recently told the House Ways and Committee in a Freudian slip of the truth that says it all.

It is worth noting that one of the charges in the impeachment of Richard Nixon in the Watergate scandal was just considering the use of the IRS for political purposes. People went to jail in Watergate for participating in and covering up a crime. So to should John Koskinen, along with Lois Lerner.

How can you drain the swamp and let the lizards slither away>.

Daniel John Sobieski is a free lance writer whose pieces have appeared in Investor’s Business Daily, Human Events, Reason Magazine and the Chicago Sun-Times among other publications. 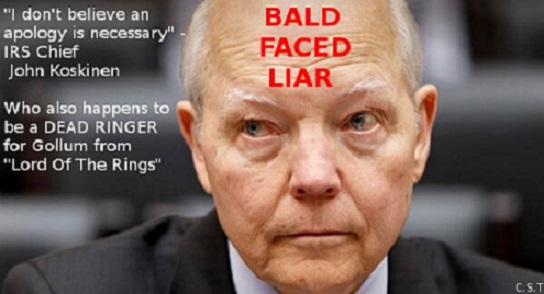 IRS' Koskinen should be Imprisoned, not Just Impeached