By Mary Fanning and Alan Jones
Senior FBI and DOJ officials involved in Special Counsel Robert Mueller’s Russian collusion investigation were also previously assigned to investigate whistleblower Dennis Montgomery’s claim that Obama administration officials John Brennan and James Clapper spied on Donald Trump.
Montgomery asserts that the FBI, under FBI Director Mueller, supplied the computers used to create a private, illegal, unconstitutional, super surveillance system that President Obama’s intelligence chiefs used to spy on Trump.
FBI Director James B. Comey, FBI General Counsel James A. Baker, and five of Mueller’s hand-picked recruits to his Russian collusion investigation team, including Peter Strzok and Lisa Page, were involved in the “buried” FBI investigation into CIA/DNI/NSA whistleblower Dennis L. Montgomery’s claims.
Montgomery specifically alleges that President Obama’s intelligence chiefs, CIA Director John Brennan and Director of National Intelligence James Clapper, with computers supplied by Robert Mueller, used their newly-created illegal surveillance system to spy on Trump, Trump’s associates, Supreme Court justices, and millions of innocent Americans.
“The proof of Donald Trump being wiretapped is in the documents that were handed over to the FBI” Montgomery’s attorney Larry Klayman told reporters Fanning and Jones.
Federal Judge Richard J. Leon on December 27, 2018 denied a request by the DOJ and Mueller’s Special Counsel Office to delay a court date for author Jerome Corsi’s $350 million lawsuit against Robert Mueller, the DOJ, CIA, FBI, and NSA.
Corsi is suing Mueller and those intelligence agencies for targeting him with “illegal and unconstitutional” surveillance and blackmail.
DOJ lawyers argued unsuccessfully that the January 3, 2019 3:00 pm court date should be delayed on the grounds that the federal government is partially shut down.
Corsi is represented in that case by attorney Larry E. Klayman.
In a separate case, whistleblower Montgomery and his attorney Klayman filed a joint lawsuit in 2017 against Barack Obama, Mueller, the CIA, the FBI, the NSA and other federal officials and agencies. Montgomery’s and Klayman’s lawsuit alleged that the defendants ignored and then covered up Montgomery’s whistleblower complaints of illegal domestic surveillance.
In 2015 Klayman helped Montgomery secure limited immunity agreements in exchange for turning over computer hard drives and other physical evidence of that illegal surveillance to FBI Director James Comey’s office.
Montgomery reportedly held a top secret security clearance as well as the rare “above top secret” SAP (Special Access Program) security clearance.
“THIS IS VERY, VERY, VERY POWERFUL TECHNOLOGY, AND IT WAS CREATED UNDER ROBERT MUELLER’S WATCH. THE LAST PERSON I WOULD THINK THAT SHOULD BE INVESTIGATING DONALD TRUMP IS ROBERT MUELLER, WHO WAS COLLECTING INFORMATION ON DONALD TRUMP TEN YEARS AGO … MUELLER HAS A HUGE CONFLICT OF INTEREST, A HUGE CONFLICT OF INTEREST” — CIA CONTRACTOR-TURNED-WHISTLEBLOWER DENNIS MONTGOMERY
Strzok and Page exchanged text message about Montgomery and Klayman after a retired four star Air Force general discussed Montgomery and secret surveillance system known as “The Hammer” during radio show
Continue at link...
http://theamericanreport.org/2019/03/30/coup-detat-doj-fbi-officials-on-muellers-russia-team-in-cover-up-of-muellers-clappers-and-brennans-surveillance-hammer-that-spied-on-trump/ 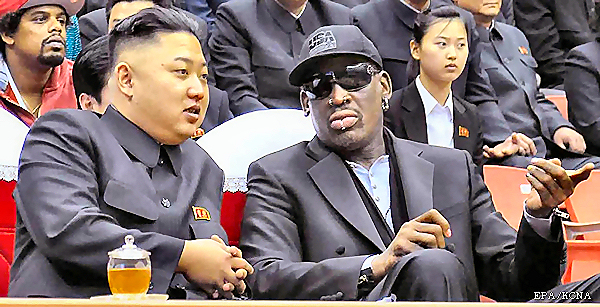 Rodman, who is not shy about calling North Korean dictator and leader Kim Jong Un his “friend for life” is going to Pyongyang in celebration of Jong Un’s January 8th birthday, according to Fox News.

Should anyone in America really care about this move by Rodman to use a basketball game as a diplomatic way to ease tensions between the United States and North Korea?  In a word: NO!

It seems clear that for the past two decades Rodman has been a man and basketball player in pursuit of his own mind-bending absurdities and by establishing a friendship with the 30-year-old leader Rodman is simply now over his head.  The former basketball star has been questioned on several occasions about using his friendship with the North Korean leader to ease some that nation’s horrendous human rights problems like the “indiscriminate killings, torture and rapes,” reports Fox News.

Yet, this basketball player seems to be either oblivious or simply operating in another physical universe. He recently commented that even with the recent horrendous murder of Kim’s uncle by way of feeding him to a pack of hungry dogs was not his concern.

So in truth, what is Rodman’s concern and what does he hope to accomplish with his so-called “Basketball Diplomacy?”