"Mop Monster," came out when Mom wanted to clean the floors but had a 7 year old, 6 year old, 4 but almost year old, and 1 almost 2 year old around to deal with under foot.

The couch became a magnificent ocean going Sailing Vessel we might call the "Mallo."  It would have to put all the sails to the West or East. Then maybe to the North or South depending on the whim of the "Mop Monster."

The Mom Monster would occasionally rise up and step by step work its way up the "Mallo."  The spirit behind the "Mop Monster" was rutheless and fun.   It was out mother playing  with us.

She, Dorothy Mallo, had to clean the house and get all those little feet to stay in one place at a time.   This way by playing with them and thinking up the character of "Mop Monster," she accomplished house cleaning and play time all at once.  Not bad for a mother of 4 to do all in one day.

I can't rememeber how many times the tangles of the "Mop Monster" scared us on to have some of the best times of our lives.  Mom could think up many things like the "Mop Monster," to get what she needed done.  But what was nicest of all was she found ways to do them while spending time with her family.  That makes her an  Ace among mom's of all generations.

I challenge moms every where to do better than "Mop Monster!"

Despite Harm to the Environment and the Economy, Fiscal Cliff Deal Fuels Continuing Corporate Welfare 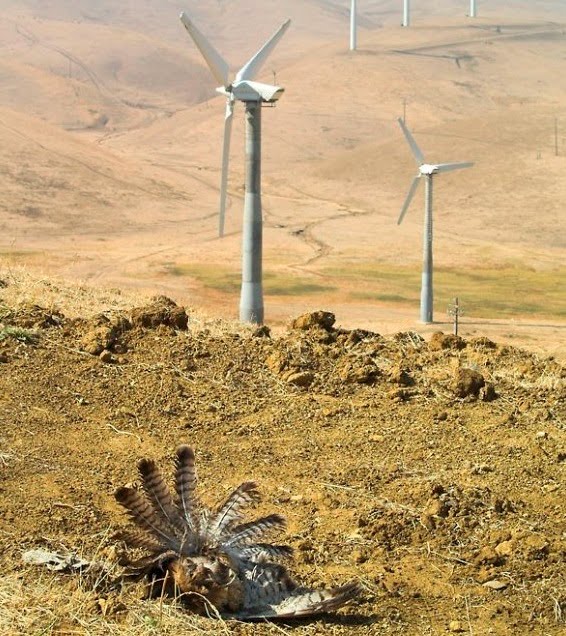 The new year began with “fiscal cliff” midnight drama and fantasy, and the wind-production tax credit (PTC), despite its negative impact on our environment and economy, packaged as a job creator and measure to save the planet, made its way into H.R. 8, the American Taxpayer Relief Act of 2012 –– a piece of legislation that was hyped as for the American people, yet it included a number of key tax extender provisions for special interest groups. “Congress extended wind energy tax credits worth billions of dollars in the last-minute deal hammered out by Congress to avoid the fiscal cliff, a move decried by free market organizations as corporate welfare,” writes the Washington Free Beacon.

Crammed through in the dark of night behind closed doors –– where the Senate was given minutes to read the bill, and the House caved under White House threats –– and with support of many Republicans –– the looming and controversial (PTC) that many high-powered energy corporations have taken advantage of, rely heavily upon, and were fiercely lobbying for, was revived once again.

"The wind industry hired a team of heavyweight lobbyists with cozy connections to Capitol Hill and the Obama administration to ensure the survival of the tax credit, the Washington Examiner’sTimothy P. Carney reported," more specifically K Street firm McBee Strategic Consulting, of which I've found over and over in my green corruption research.

NOTE: “The Lucky Seven Stimulus Authors” are those that helped craft the 2009-Recovery Act and have financially benefited, of which I have already covered General Electric, John Doerr of Kleiner Perkins, Senator John Kerry, which I wrote about last week. I have given mention to billionaire George Soros as well as the left-wing organization the Apollo Alliance, with TJ Glautheir and McBee Strategic Consulting topping off my list. Full report soon to be released.

“Congress first enacted the wind energy PTC in 1992 and has renewed it seven times since,” even as part of the 2009-Recovery Act. The Institute for Energy Research counts the hidden realities of the PTC extension, noting that "The Joint Committee on Taxation estimates that the one year extension will cost American taxpayers over $12 billion." "But that figure doesn’t begin to represent the full cost of wind power,” including the detriment to ratepayers. And if Big Wind gets its way over "the next six years, then the PTC would cost over $50 billion."

Unknown to the American public is another green government freebie blowing out of the stimulus package. The 1603 Grant Program –– a relative of the PTC, which is part of President Obama’s trillion-dollar spending spree –– is administered by the Treasury Department, where billions in favored-businesses are given tax-free cash gifts. This program was also touted as a jobs creator (of course saved and supported), yet most of the so-called green job gains are temporary.

According to energy.gov, “The Section 1603 program was created under the American Recovery and Reinvestment Act to support the deployment of renewable energy resources. The 1603 program offered project developers the option to select a one-time cash payment in lieu of taking the Investment Tax Credit (ITC) or the Production Tax Credit (PTC), for which they would have otherwise been eligible.”

The report, “American Taxpayer Investment, Foreign Corporation Benefit,” states that as of December 5, 2012, “nearly $16 billion in federal funds (ironically, the same amount as the Department of Energy’s 1705 risky loan portfolio) has been awarded under this program,” of which “approximately $10.8 billion (68%) of the total amount in Section 1603 grants awarded was for wind and another $3.8 billion (24%) was for solar projects.”

Furthermore, “President Obama’s FY 2013 Budget proposes extending the Section 1603 grant program for another year, to include property with a construction start date of 2012.”

What’s funny is that as I was preparing my Big Wind findings, at the end of December 2012 I had downloaded the 1603 awards spreadsheet, which records 8275 awards, totaling $15,964,130,442. Moreover, tucked neatly inside the fiscal cliff deal is where we find the 1603 again ––– now part of the two-month delay on sequestration. This means that there was no “immediate reduction in 1603 cash grants from the Department of Treasury. However, this 1603 reduction can still happen on March 1, 2013 if Congress does not enact another extension or strategy to avoid sequestration.”

Now we know President Obama's priority for his second term –– he's dead set on pushing a fierce and radical climate change agenda and funding green energy with taxpayer money, no matter the cost or consequences. So, we’ll anticipate March; follow the president’s budget; and watch for future requests for stimulus funds as well as earmarks tucked away in unread legislation coming down the green pipeline, but for now we'll go back in time to the president’s job council…

Lewis “Lew” Hay, III is executive chairman of NextEra Energy, Inc., and it is estimated by Forbes, that CEO “Hay earns nearly $10 million in total compensation from NextEra.” Despite the fact that Hay was actually a “major political contributor to Sen. John McCain in 2008,” he quickly learned which side his power company could generate the title of the "Third Largest Recipient of DOE Risky Loans." Hay too joined wealthy Democratic donors on Obama’s Jobs Council in 2011, along with the other two I have tackled in this series, “Spreading the Wealth to Obama’s Ultra-Rich Job Council” –– Jobs Czar, Jeffrey Immelt CEO of General Electric has raked in $3 billion and counting, meanwhile John Doerr, along with his “climate buddy" Al Gore's, VC firm Kleiner Perkins is tied to at least $10 billion of stimulus funds. Both General Electric and Doerr were key contributors to what went into the 2009 Stimulus.

In my opening, I had stated that “NextEra Energy’s Green Money” was at least $2.3 billion, but that’s just from the Department of Energy’s (DOE) 1703 Loan Guarantee Program, of which I recorded in another green energy, crony corruption post last summer. We’ll revisit the DOE and Big Wind, but for now there is more you should know about NextEra…

NextEra Energy, Inc. is one of the oldest, third largest, and arguably one of the most solid power companies in the world, with “2011 revenues [that] totaled more than $15.3 billion.” And NextEra Energy Inc. has two primary subsidiaries:

As a follower of NextEra, I found a fascinating analysis by John Fund of the National Review Online which states, “Begun 20 years ago to spur the construction of wind-energy facilities that could compete with conventional fossil-fuel power plants, the tax credit [PTC] gives wind an advantage over all other energy producers. But it has mostly benefited conventional nuclear and fossil-fuel-fired electricity producers. The biggest user of the tax credit is Florida-based NextEra Energy, the nation’s eighth-largest power producer. Through skillful manipulation of the credits, NextEra from 2005 to 2009 'paid just $88 million in taxes on earnings of nearly $7 billion,' Businessweek reports. That’s a tax rate of just 1.25 percent over that period, when the statutory rate is 35 percent.”

Moreover, Fund gives us an astonishing and heartbreaking look at the “carnage inflicted on Mother Nature," quoting Paul Driessen of the Washington Times, "The U.S. Fish and Wildlife Service estimates that wind turbines kill 440,000 bald and golden eagles, hawks, falcons, owls, cranes, egrets, geese, and other birds every year in the U.S., along with countless insect-eating bats.”

Sadly, Fund states, “The actual numbers are probably far higher. The turbine blades of the nation’s 39,000 windmills move at 100 to 200 miles per hour and can mow down anything that gets in their path.” “Over the past 25 years, turbines at Altamont Pass, Calif., alone, have killed an estimated 2,300 golden eagles leading to an 80 percent drop in the golden-eagle population of southern California.”

Ironically, when you read the fine print, as exposed by the Manhattan Institute, who calculated “The Real Costs to Taxpayers in Subsidizing Big Wind,” –– federal taxpayers (under former President Bush and now Obama), in effect, are subsidizing the killing of federally protected birds.”

Where are the environmentalists and Rachel Maddow screaming bloody murder? The chirps are light, and prosecution is non-existent because our “federal government looks the other way as wind farms kill birds, but haul oil and gas firms to court” –– all the while the Obama administration protects Big Bird at all costs.

But then again, Big Wind, to many like the Telegraph, is the most corrupt industry in the world –– “without the lies it tells as a matter of course and without the cosy stitch-ups it arranges with regulators and politicians at taxpayers' expense, it simply would not exist.”


Much more to this huge Big Wind story–– continue reading...

Here are the rest of the topics I've covered:

This was Part Three of "Spreading the Wealth to Obama's Ultra-Rich Job Council: The Green Five"

Stay tuned for the final installment where we take a look at Billionaire Penny Pritzker as well as Richard Dean "Dick" Parsons, Former Chairman of the Board of Citigroup, Inc –– both part of Obama’s Multi-millionaire, Billionaire Jobs Council Club.