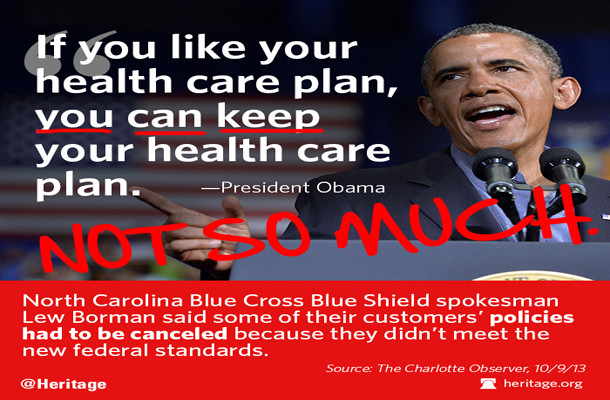 How strangely will the Tools of a Tyrant pervert the plain Meaning of Words!” Samuel Adams, January 21, 1776

For many of the 3.5 million American families that according to the Associated Press, the loss of their family health insurance came at them like a wrecking ball. Their very economic health and stability for their family members has been shattered because of a president who comforted millions of citizens with the one phrase which shall live in historical infamy: “If you like your health care you can keep your health care guaranteed and period!” Barack Obama – 35 times!

That one statement which as it turns out was a carefully plotted assault upon the comfort and trusting nature of the middle of the road America was used to plant the Trojan horse into the health care system like a deadly killer virus causing mass destruction. Now, 3.5 million families, much like you or your neighbor or co-workers are faced with the onerous choice of Obama’s one size fits all brand of engineered socialism or face possible excessive fines, liens against your home and in the end a surgical neutering of your own self determination and freedom. You have been obamafied!

Recent responses from readers as well as on conservative radio and in print have examined the horror and dismay that many families are facing as they attempt to deal with providing health insurance for a family member undergoing an operation, or a child who is faced with an illness or a female member who is suffering from breast cancer. Tens of thousands of examples of the gloomy prospects are pouring in, and yet in each one there is a solution.

Instead of worrying about what and when the congress will remedy this debacle it is clear that the solution lies with the family that has suffered this individual injustice. This is truly the point in the American experience when your neighbor, your distant relative and even your babysitter or church member can create your own distinctly American Insurance Freedom From Obamacare Campaign.

Imagine how the nation’s founding fathers felt at the beginning of the American Revolution and even months and years before. Sure there were writers and patriots in the colonies that were demanding justice from the British, which were largely ignored. Did that deter the common patriot who decided that his neighbor’s home that had been invaded time and time again by the British was not his fight? What about the British loyalists who were working to destroy the rights and freedoms which were God given to each and every American colonist member? These rights were stripped away by colonial government loyalists that cared more for the cruel boot and heel on their necks than the true essence of what freedom from continued oppression represented. These modern day sympathizers are the Obama democrats that stand with the socialist-in-chief and continue to mine the harbors of freedom.