There is a new graphic about Cabela's and more obama broken promises.......

I will cut taxes

I will cut taxes - cut taxes - for 95 percent of all working families, because, in an economy like this, the last thing we should do is raise taxes on the middle class.
Barack Obama

How about this…………Cabela's explicitly displays obamacare tax... ON EVERYBODY 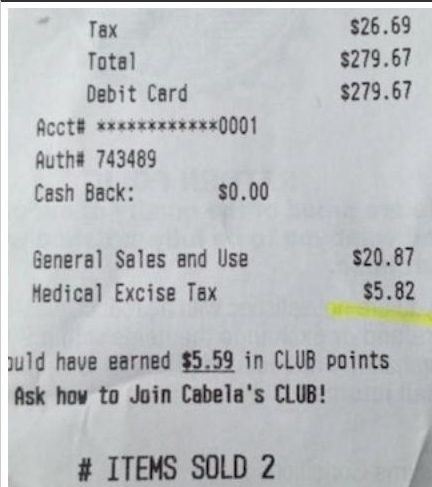 Need more? How about this……

If the people cannot trust their government to do the job for which it exists - to protect them and to promote their common welfare - all else is lost.
Barack Obama

The fact that we are here today to debate raising America's debt limit is a sign of leadership failure. America has a debt problem and a failure of leadership. Americans deserve better. I, therefore, intend to oppose the effort to increase America's debt.

Now we have the Fiscal Cliff debacle.

How Will the Fiscal Cliff Tax Deal Affect Your Paycheck?

The answer is ….  It REDUCES it…. It RAISES your taxes; how much depends……

It depends on your Marital Status, Deductions Claimed and Income.

Here are some examples

A family of 4 is hit harder than a single dude!

So….. how do you feel about

….. I will cut taxes - cut taxes - for 95 percent of all working families, because, in an economy like this, the last thing we should do is raise taxes on the middle class.
????

For those of you who excelled in math the above will all fit together.  The one thing that also needs to be part of the deal is a Balanced Budget Amendment so the Nation can get off its spending binge since there is no single person (ie Federal CEO) managing the budget unlike every major corporation in the world.  It's just been a free for all in DC the last 4 years.  RZ UVA Econ (3.9 GPA) '76 High Honors While Washington D.C. political leaders battle on Capitol Hill and in the White House over the approaching ominous fiscal cliff, it appears House Speaker John Boehner has shoved conservative House Tea Party members over another type of cliff. In the military it is called “relieved of duty”, and that is exactly what Boehner has done in the 2012 post-election “House” cleaning.

The same conservative Tea Party House member that brought the GOP the largest surge of new members since the 1930’s, has resulted in several key leaders being quietly shown the committee exit door by Boehner. What is truly mystifying to many conservatives across the nation is why now?

With the House republicans retaining the majority and therefore holding onto the speaker’s gavel for Boehner, why not reinforce conservative leadership at a time when an overzealous president is making every attempt to neuter the GOP brand. Obama wants to force Boehner and House Republican eat their “No-tax hike” pledge in the fiscal cliff negotiations!

Deep within the bowels of the White House political office, there has to be plenty back slapping being shared, as they along with Obama watch the House Republicans take their unwanted political cheese bait. While the nation did reelect the president with bait and switch political tactics and epic character assassination methods, the House Republicans were still elected with a majority as well.

This conservative majority of Americans who came to the polls in November, could not imagine that Boehner would weaken his conservative hand, by shedding noted House Tea Party leaders like, Kansas’ Rep. Tim Huelskamp ( R-Kansas), who gained a well-respected reputation for standing up against Planned Parenthood, banning gay marriage and other conservative causes while a state senator. As it turned out, Boehner demonstrated his gratitude by booted him ...

This may be backroom and insider Capitol Hill politics, but was not changing the status quo of congressional GOP moderation the reason that the over whelming conservative swell of new congressmen and women were to be about after 2010 elections?

Apparently not the case according to congressman, Huelskamp, who stressed to his fellow conservative house caucus members, Tuesday, December 4th, “It confirms, in my mind, Americans’ deepest suspicions about Washington. It’s petty, it’s vindictive, and if you have any conservative principles, you will be punished for it.”

Yes, the punishment was swift and it cut deep into the heart of Tea Party conservative congressional members. Michigan’s own, Tea Party favorite Rep. Justin Amash (R-Mich.), was dispossessed of his Budget committee seat. The purge continued with Arizona Rep. David Schweikert, being relieved of his seat on the powerful on Financial Services Committee. There were many others.

According to Slate, congressman Amash asserted this was this was a plain and simple congressional backroom “purge!”

Sun-Tzu made the famous observation “lose the battle win the war” yet when translated into fiscal policy it’s not desirable, yet our GOP leadership are going to roll hoping to come back later.  I recently made the move to the Tea Party as I cannot in good faith watch the GOP leadership horse trade with peoples lives. The fiscal cliff will be seen in the coming years as just one of many artificial dramas engineered by leaders on both sides as part of a process. That process is called “real politik” but it simply defends the status quo.

What we need is a dramatic change in direction as a nation; education delivers generations into welfare slavery. We spend like a lotto winner in Vegas and the “Washington Crowd” simply posture while making no radical proposals. We are going broke yet we act like the irresponsible sub-prime borrower.

I am a Venture Capitalist; I invest in innovation and entrepreneurship, the very driving forces which put this great nation at the top of the world. Yet I wonder, do any of our leaders understand it anymore? In the real world you must spend less than you receive and build strategic reserves so you can weather a harsh winter. Under the stewardship of our leaders we have become dependent on the benevolence of other nations.  We are on welfare!

So what's the solution?  Well as hard it will be, we need to cut benefits. We need to loosen the death grip the extremist environmental movement has on our energy pioneers. I could go on yet what we have to do as a matter of urgency is start with a joint understanding that the country cannot continue to borrow, whilst overseeing the destruction of our ability to produce wealth.  If you lose your job, its not a good idea to keep spending on Visa.